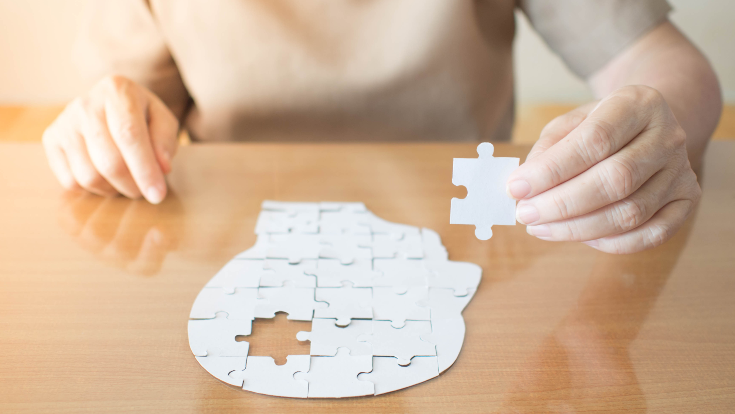 Dementia – When the brain deteriorates

Alzheimer’s disease is the most common form of dementia – but not the only one. What are the signs of this serious age-related disease, and what can relatives do? USZ experts give helpful tips.

Affecting more than 130,000 patients in Switzerland, dementia is one of the most serious age-related diseases – also for relatives. This is because sufferers depend on the care and support of their families, which often takes its toll. “Dementia always affects the whole family,” says Patricia Lanz, Senior Physician at the USZ Geriatric Clinic.

However, forgetfulness isn’t always caused by dementia. “The brain deteriorates with age,” says Professor Hans Jung, Chief Physician at the USZ Neurology Clinic. He recommends a diagnostic work-up consisting of a physical examination and neuropsychological tests. Depending on the results, other diagnostic measures such as blood tests or an MRI may be indicated. These can help rule out “pseudodementia”, a different disease which causes similar symptoms.

Alzheimer’s disease is by far the most common form of dementia and occurs when nerve cells die in the brain. Intensive research has now made it possible to identify the disease in the laboratory before any symptoms appear. This is because the death of nerve cells can begin up to 20 years before the disease manifests. The USZ and the University of Zurich operate one of the world’s first devices enabling the disease to be diagnosed in the laboratory – a so-called PET/MR scanner, which is located in Schlieren.

Despite the advances made in science, there is as yet no cure for Alzheimer’s. However, there are several highly effective treatments. Medication can delay the progression of the disease or alleviate its symptoms. It also helps if patients remain physically and socially active and exercise their brains. “This enables patients to enjoy a good quality of life for longer,” says USZ expert Jung.

Prevention is also possible. Properly regulated blood pressure protects the brain. Moreover, studies have shown that a healthy lifestyle can be beneficial – particularly regular exercise, moderate alcohol consumption, maintaining social contact, pursuing hobbies such as practising a musical instrument, and eating a balanced diet. Following the Mediterranean diet or MIND (Mediterranean–DASH Intervention for Neurodegenerative Delay) diet can have a particularly positive effect on outcomes. The MIND diet includes plenty of wholegrain products, nuts, berries and green vegetables, fish once a week and chicken twice a week; however, only a little cheese and red meat are permitted, and sweets are restricted to less than five times a week. Just one glass of wine a day does no harm either.

Relatives can recognise the signs

Along with Alzheimer’s, there are numerous other forms of dementia. These don’t always primarily affect the short-term memory. Changes in character (e.g. when tidy people suddenly become very untidy), hallucinations, certain neurological symptoms and frequent falls can be symptoms of specific forms of dementia.

If signs of dementia are noticed, it is advisable to have them investigated as soon as possible, for example at the USZ Neurology Clinic’s Memory Clinic. The USZ Geriatric Clinic also offers a memory consultation hour for dementia screening and a DemCare consultation hour for relatives. The latter is offered by a doctor and expert nurse who are willing to listen when relatives are facing worries or challenging situations when dealing with family members with dementia. They also provide expertise and specific tips.