Specialists from USZ have removed an enormous blood clot from a patient's aorta with the help of a new method that had never been used before in Switzerland. Instead of performing open heart surgery, which was judged to be too risky in this case, the blood clot was extracted by suction using a catheter.

The patient was a 66-year-old male who had been hospitalized with a coronavirus infection that left him needing an artificial respirator. The man, who had been in good health prior to the infection, recovered quickly from his lung problems but developed severe vascular complications.

Clotting in the aorta leads to organ damage

A large blood clot developed in the patient’s aorta. Pieces of the clot then became dislodged and were transported through the patient’s bloodstream and into the intestinal arteries. As a result, sections of both the large and small intestines had to be surgically removed as an emergency measure. The blood clot also had to be removed to prevent any further life-threatening organ damage. Until now, this would have meant opening the patient’s chest and connecting him to a heart-lung machine. In this case, however, open heart surgery was deemed to be too risky. The interdisciplinary team, comprising angiologists, heart surgeons and anesthesiologists, instead opted to use a suction catheter to perform the operation; up to that point, these had only been used to remove blood clots from the veins.

For the procedure, the suction system cannulae were inserted into an artery and vein in the patient’s groin and connected to a self-contained hose circuit, into which a centrifugal plump and blood filter were integrated. An ultrasound probe was inserted into the patient’s esophagus to provide a precise visualization of the blood clot, which measured over three centimeters (video 1). It was at this point that the pump was activated and, with a blood delivery volume of four litres per minute, it created considerable suction at the tip of the suction cannula inside in the aorta. The suction catheter was then maneuvered toward the blood clot so it could latch on to it under the maximum possible suction (the vibration of the clot caused by this suction from the cannula can be seen in video 2). The clot was then sucked out piece by piece, exiting the patient through the tube before being deposited into the blood filter (video 3 shows the clot getting smaller). The blood clot fragments remained trapped in their new receptacle while the filtered blood was pumped back into the patient through the tube system, entering his body via the second (venous) cannula (photograph of the blood clot in the filter). This kept blood loss to a minimum. Key factors in the success of this operation were the continuous ultrasound measurements and meticulous monitoring of the heart-lung machine. Excellent communication between the various specialists is also extremely important in operations like this.

Up to 20% of hospitalized coronavirus patients develop blood clots

For patients with coronavirus, the risk of developing thrombosis is a complication that is as feared as it is common. Around one in five hospitalized patients develop blood clots that then clog up small or large blood vessels. This can lead to organ damage – such as damage to the intestine, as in the case described above – but it can also cause strokes or embolisms in the lungs. The root cause of these complications is the blood clotting caused by the coronavirus infection. The Angiology team at USZ had already demonstrated that SARS-CoV-2 causes arterial and venous blood clots in a study carried out back in spring 2020, which was conducted in cooperation with a large Milan-based clinic. 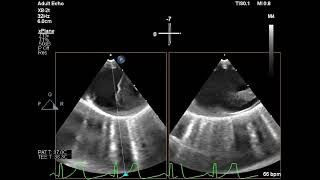 Clot in aorta in ultrasound

Blood clot getting smaller during suction of 4 liters per minute