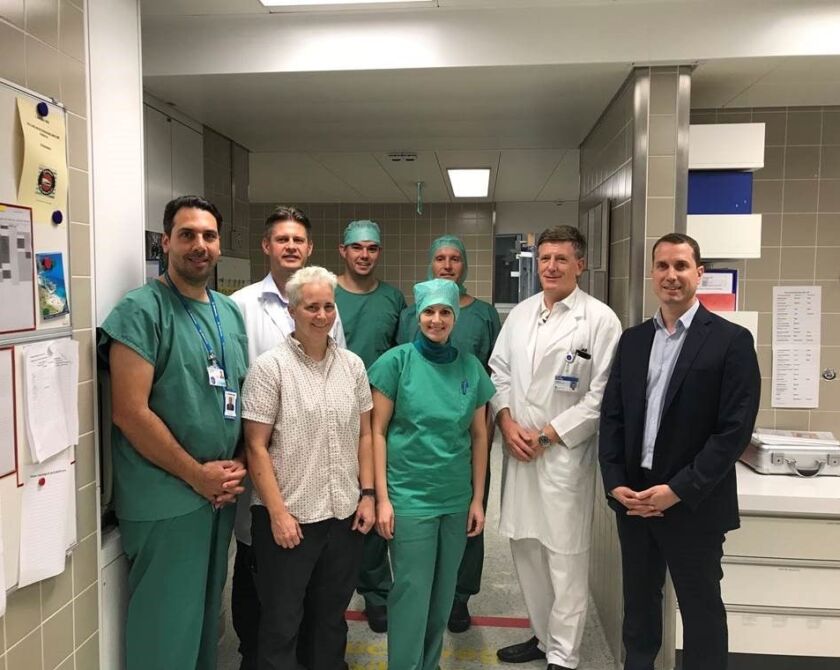 Neurosurgeons at the University Hospital Zurich (USZ) have used stereotactic laser ablation to destroy tumour tissue in the brains of two patients. This is the first time that this procedure has been performed in Switzerland. The new method can be used to ablate tissue carefully and with the utmost precision. The procedure has only recently been licensed in Switzerland.

In September, a team of neurosurgeons, neuroradiologists and anaesthetists at the University Hospital Zurich became the first in Switzerland to treat tumour tissue in a female patient using stereotactic laser ablation. A second operation was carried out on a young man in mid-November. The procedure was only licensed in Europe a few weeks ago.

Stereotactic treatment methods use image-guided, computer-assisted navigation systems to facilitate precise localisation. Stereotactic surgery can therefore be performed with the utmost precision, which is particularly important when operating on the brain.

It has long been possible to remove samples of deep-seated tissue changes or tumours in the brain for analysis by performing stereotactic needle biopsies. However, until now it was only possible to remove pathological tissue by performing open surgery, a complex, risky procedure which is also stressful for the patient. Stereotactic laser ablation now presents a gentle, highly precise alternative for deep lesions with a diameter of up to two centimetres.

With laser light into the depths of the brain
The surgery is performed under general anaesthetic. As with a stereotactic biopsy, a thin laser catheter is positioned precisely in the centre of the lesion. All that is required is an incision of three millimetres and a tiny hole drilled in the skull. The patient is transported into the MRI scanner, where the first measurements are taken. Afterwards, the catheter is connected to a monitoring computer and the laser light is switched on (the catheter is constantly flushed to keep it cool). The laser light heats the tip of the catheter, which is then used to destroy the surrounding tumour tissue. Depending on the temperature, the laser needs varying lengths of time for this procedure and must be adjusted continually. The MRI scanner therefore checks the tissue temperature every four seconds. The connected computer can then immediately calculate the amount of dead tissue. This information enables the surgeons to keep the operation site under constant surveillance and see exactly whether all the diseased tissue has been removed (ablated). The healthy surrounding tissue is protected as much as possible.
Stereotactic laser ablation entails no particular risks. The application of heat also eliminates any risk of infection. Technical measures are in place to ensure, for example, that the catheter cannot become overheated.

Technology and teamwork lead to success
Stereotactic laser ablation has been used in the USA since 2007 and has now proven itself in more than 2,000 cases. It is most commonly used for the surgical treatment of epilepsy and smaller tumours. The procedure is technically highly complex and requires considerable surgical skill. “We have had an intra-operative high-field MRI at the USZ since 2013 and were taught this surgery by experienced doctors in the USA some time ago. In this way, we created the best possible conditions enabling us to use the method right away, as soon as it was licensed”, explains PD Oliver Bozinov, M.D. , chief physician at the Department for Neurosurgery. “Our first two operations went very well. This was to no small degree due to the perfect cooperation between the neurosurgeons, neuroradiologists and anaesthetists working in a big team. An operation of this type would not be possible without them”, confirms Prof. Luca Regli, M.D., director of the Department for Neurosurgery. “We are delighted to be able to provide this new, gentle method to eligible patients.”