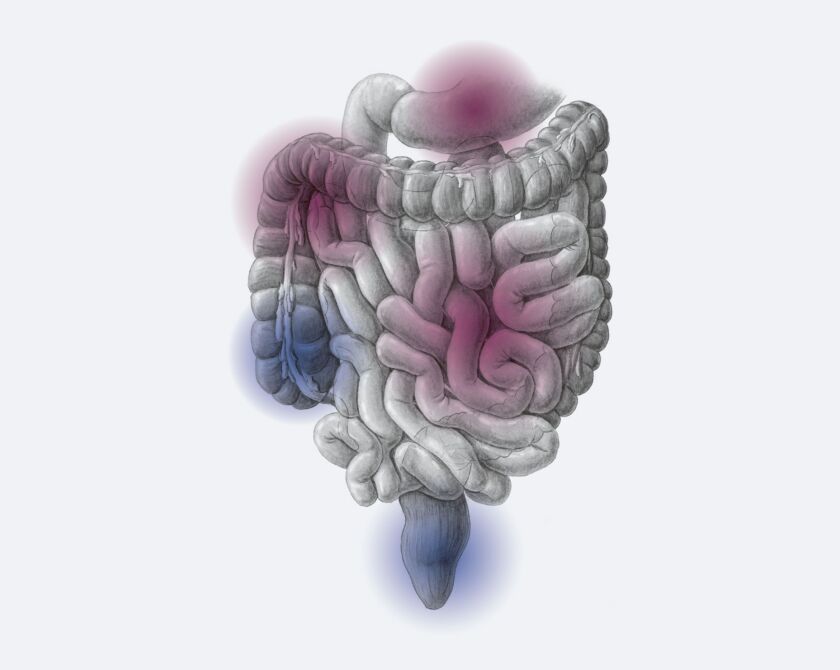 Chronic inflammatory bowel diseases such as Crohn’s disease and ulcerative colitis are painful; in many cases, they also have a severe impact on the patient’s social life. Drug treatment provides temporary relief, but for many patients, surgery eventually becomes inevitable.

Around 20,000 people in Switzerland are affected by inflammatory bowel disease, IBD for short. This abbreviation encompasses Crohn’s disease and ulcerative colitis, which typically develop in men and women aged between 20 and 30. “It’s often very difficult to identify a specific cause,” says Luc Biedermann, Managing Physician of the Department of Gastroenterology and Hepatology. “In many cases, various factors come together.” In this respect, heredity and lifestyle could have just as much of a part to play as environmental influences, an imbalance in the intestinal flora or an irritated immune system, says Luc Biedermann.

As the symptoms are often very subtle, particularly in the early stages of the disease, the patient may ignore them or dismiss them as irritable bowel syndrome. Typical manifestations of chronic inflammatory bowel disease may for example include diarrhoea associated with stool irregularity, blood in the stool or abdominal cramps. These could be accompanied by lethargy, fever or fatigue. Many patients also find that IBD has a severe impact on their sex life and social life: the effects of the disease often lead to enforced isolation or a withdrawal from ordinary everyday life. “Ultimately, patients have to learn to cope with a lifelong condition;
that’s why consulting a psychotherapist can sometimes help them come to terms with the disease,” explains Philipp Schreiner, Senior Physician at the Department of Gastroenterology and Hepatology. While ulcerative colitis only affects the large intestine, Crohn’s disease can affect all parts of the digestive tract from the mouth to the anus. The inflamed parts of the bowel are not usually connected, i.e. diseased segments alternate with healthy ones. In both Crohn’s disease and ulcerative colitis, the natural barrier of the intestinal wall is dysfunctional, allowing bacteria to penetrate the intestinal wall practically unhindered. This causes the body to switch into defence mode; inflammatory reactions are the result.

It is not (yet) possible to cure Crohn’s disease or ulcerative colitis – however, symptoms can be eased, thus improving the patient’s quality of life. “That’s why it’s so important to diagnose the disease in its early stages,” emphasises Luc Biedermann. “Drug treatment can bring about rapid, lasting improvement in nine out of ten cases.” The drugs most commonly prescribed are cortisone or other immunosuppressants; there has also been an increase in the use of biologicals, which use antibodies to fight inflammation. The first line of medical treatment is to reduce or suppress the episodes of inflammation.

The medication helps many Crohn’s disease and ulcerative colitis patients cope with everyday life without too many restrictions. However, surgery is sometimes unavoidable, explains Philipp Schreiner, firstly because taking drugs over a long period of time is unadvisable due to the side effects, secondly because fistulas or abscesses may form during episodes of inflammation and could require surgical treatment. “Around 15 per cent of ulcerative colitis patients have to undergo surgery as time goes on. The same applies to 40 to 50 per cent of Crohn’s disease patients,” explains Philipp Schreiner. Surgery for Crohn’s disease involves the removal of diseased tissue, while ulcerative colitis patients usually have the entire colon removed. This surgery can be performed using new, minimally invasive methods. Here too, the primary goal is to increase the IBD patient’s quality of life in the long term.

In contrast, one topic that has nothing to do with chronic inflammatory bowel disease is constipation. Sluggish bowel activity is often a concomitant of some other disease. Factors such as genetic predisposition also have a certain role to play, as do diet, smoking, psychological dysfunction, medication and chronic stress. Studies suggest that one in three people in industrialised countries suffer from intermittent or even constant constipation. But what about when the flatulence and abdominal pain persist, or when additional exercise, a change in diet and home remedies such as tea or warm water fail to get the bowels moving again? In this situation, you should certainly consult a doctor to investigate any possible causes. The same applies when bouts of diarrhoea become practically the norm. The general rule of thumb is: digestive problems that persist for longer than three months can be described as “chronic”. Anything from three times a day to three times a week is considered normal. Ultimately, stool frequency is not only an intimate affair but also an extremely individual one.

Department of Gastroenterology and Hepatology