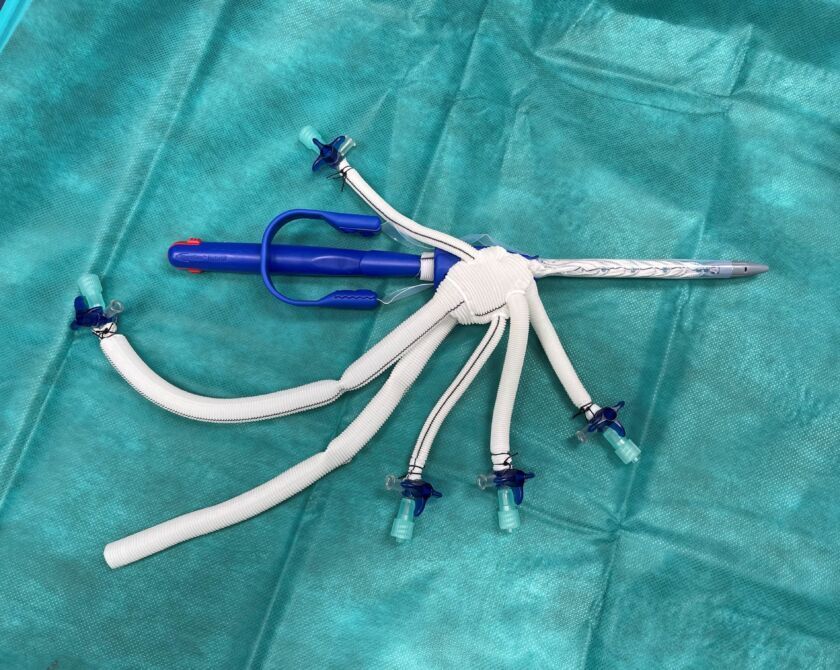 When the main artery threatens to burst: a new vascular prosthesis for previously inoperable patients

If the main artery is at risk of bursting, it can be replaced with a prosthesis. A brand new type of prosthesis is now saving the lives of patients who were who previously too ill for this life-saving surgery. The Clinic for Vascular Surgery at USZ is only the second medical institution in the world to perform this operation.

The main artery, known in medical terms as the aorta, is the largest blood vessel in the body. Damage or enlargement of the aorta is therefore a life-threatening condition. Patients whose aorta is at risk of rupture can have a stent – a small tube – inserted laparoscopically to strengthen the affected segment. If the segment involved is too large, or if the walls of the aorta are too weak for a stent, the enlarged part of the aorta or even the whole aorta can be replaced with a conventional vascular prosthesis. If the entire aorta is diseased, the patient will require major surgery that involves opening up the chest. Moreover, the functions performed by the heart and circulatory system will have to be taken over by a heart-lung machine while the prosthesis is being implanted.

Until now, there were no treatments available for patients whose health was too poor to undergo this major surgery. The risk of them not surviving the operation was too high. They had to live with the possibility that their aorta could tear at any time. Surgeons at USZ are now able to implant a life-saving aortic prosthesis in patients who were previously considered inoperable. This is all thanks to an innovative procedure that combines the advantages of minimally invasive surgery with those of open surgery, thus making it possible to replace the entire aorta. “The aortic prosthesis is inserted into the chest from below,” explains Alexander Zimmermann, Director of the Clinic for Vascular Surgery at USZ. “That means we neither have to open the thorax, nor do we need a heart-lung machine, because the blood flow can just be stopped section by section as we implant the prosthesis.” This eliminates the most significant stress factors associated with the implantation of aortic prostheses.

The Clinic for Vascular Surgery at USZ is only the second clinic in the world to have performed this surgery using the new aortic prosthesis – and the operation in question was only the seventh time that the new vascular prosthesis had been implanted at all. The surgical procedure was developed at the Aortic Centre at University Hospital Hamburg-Eppendorf (UKE). Colleagues from UKE accordingly assisted the team from the Clinic for Vascular Surgery as they performed this procedure at USZ for the first time.

The first patient, a gravely ill man in his early 60s, was operated on at USZ in August and came through the surgery very well. He had been rejected as a candidate for conventional aortic replacement surgery several times due to his poor state of health. “There were no complications whatsoever during the surgery,” Alexander Zimmermann is happy to report. For the surgeon, this procedure is no more difficult than open surgery. “We now have a possible treatment for patients who couldn’t be considered for any of the previous procedures. This is a crucial advance in aortic surgery,” says Zimmermann. Since it is less stressful and the risks are lower, the procedure with the new aortic prosthesis is also suitable for other patients who need a replacement aorta. However, it is still necessary to obtain special permission every time the prosthesis is used; moreover, each prosthesis has to be made separately from scratch and customised for every single patient. Zimmermann believes that a certain degree of standardisation may be possible in the future, thus making the prostheses more widely available.

Alexander Zimmermann and part of the surgical team